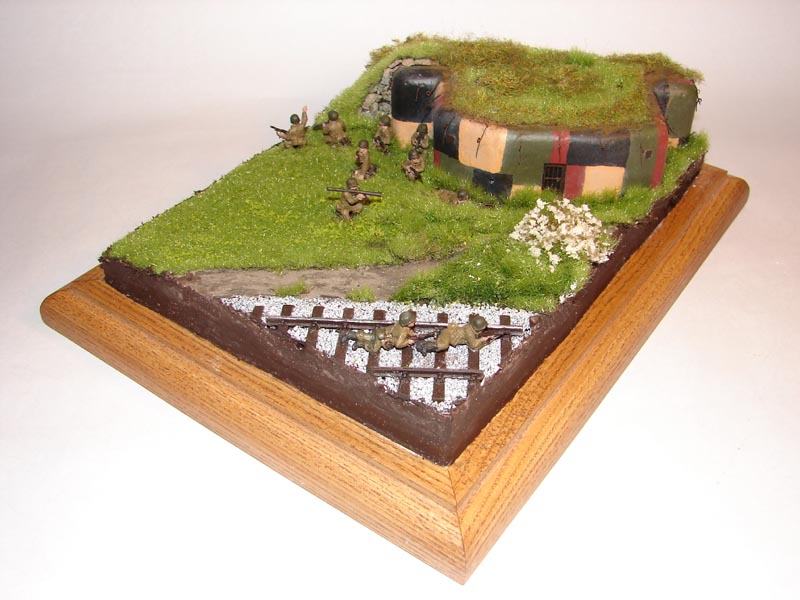 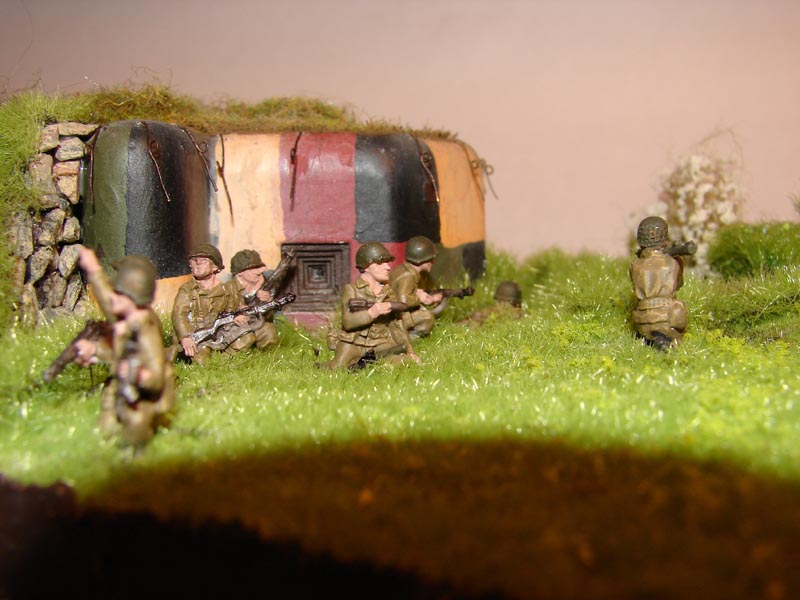 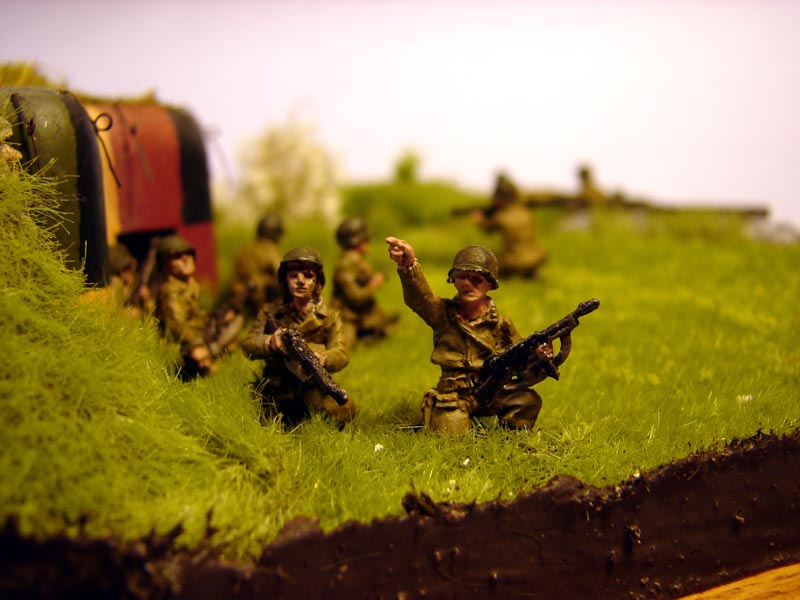 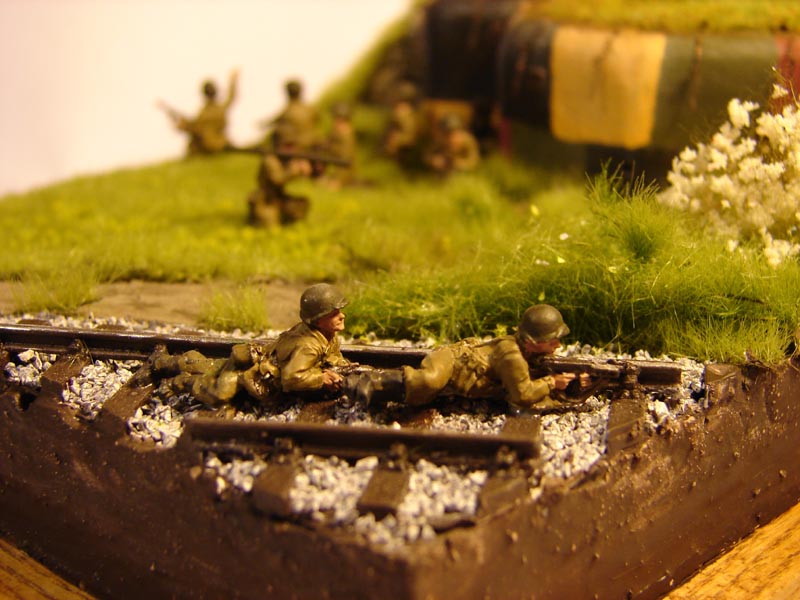 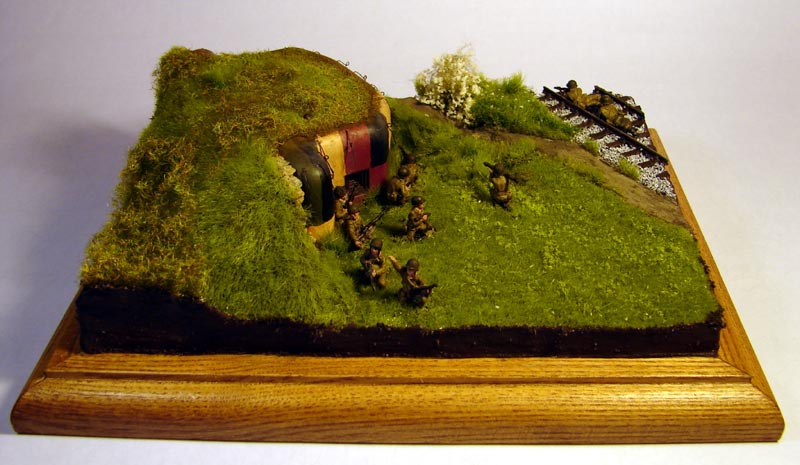 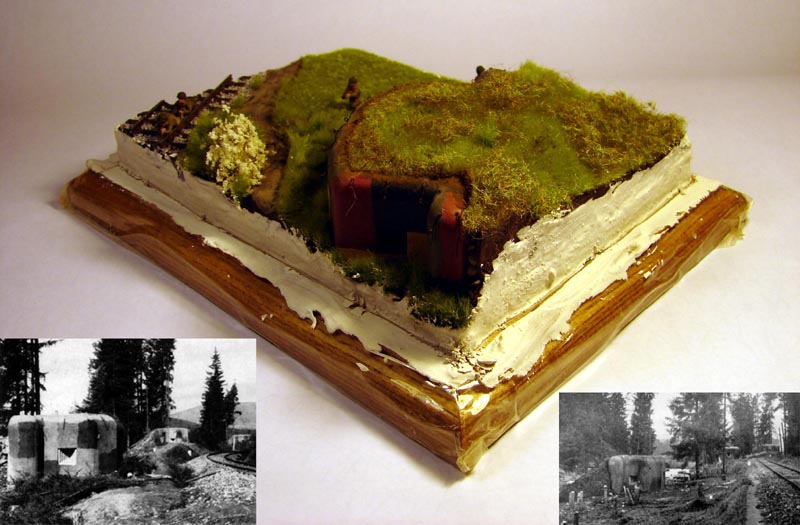 Modifications: I added only hooks for camouflaging net from brass wire to the pillbox.

Description: In the night from 4th to 5th May 1945 third platoon of company G, 2nd Infantry Battalion of US 5th Infantry division, led by lieutenant N. J. Bone, was send to seize the Soumarsky bridge over Vltava river in Sumava mountains, Czechoslovakia. North bank of Vltava was defended by elements of German 11th Panzer Division under General von Buttlar. German defence was strengthened by former Czechoslovak pillboxes, built in 1937 against Germany. Just prior lieutenant N. J. Bone's men approach to the bridge German defenders blew it up. GIs managed to create a small bridgehead on the northern bank supported by two rifle sections of G Company and an MG section of the Company H until daybreak. Then the crossing was covered by German MG fire from pillboxes nearby. GIs on the bridgehead seized three pillboxes next to the bridge but were pinned down by fire from other pillboxes and by a German tank. The rest of G Company found another crossing over the river in the south-east from the bridge and until 3 pm wiped out German defenders form the pillbox-line and relived the besieged bridgehead. Diorama shows US Infantrymen on the bridgehead taking cover behind a LO vz. 37 A pillbox. It is in distinctive square camouflage used in this area by Czechoslovak Army during Munich Crisis in 1938 and confirmed still on pictures from 1945 too. One soldier is signalizing to the southern bank while a bazooka team covered by a BAR fire is trying to hit an embrasure of the next pillbox in the line.

Judge 1
Figures: I really like this little scene and the story that goes with it, well done here. The pill box with its camouflage is fascinating and makes a very good looking topic. Your on the right track with your figures but a little more time and care spent in the initial blocking out of the colours and a few more coats of paint would have really paid off. On a few of them I can still see some unpainted areas and on most of them the colour hasn't covered well enough. I can also see that in some places a bit of the flesh colour has made it onto the uniform, when painting figures you must be prepared to do lots of touch ups at the end. You can also make figures with similar coloured equipment (belts, water bottles holders, straps etc.) more interesting my making them different shades of the base colour. Time spent practicing some of the basics such as adding shadows and highlights will certainly improve your work as will lining out the uniform details(pockets, seams, collars, straps, etc.) in a darker colour. Nice work on such an good looking project.
Judge 2
The subject of the diorama – US troops assaulting old Czech pillboxes – is very interesting in itself. And the subject is well researched. You gave a detailed description and even photos, so good work here! As for composition – it also deserves high mark. The choice of the figures is excellent. They with their emotional faces and tense poses look like they’re done for this diorama. The figures are well-placed as well. The closer to the enemy they are the more “hiding” or cautious poses they have. The bazooka man is taking cover behind bushes and two GIs are taking cover behind the rail which also looks natural. The placement of the bunker and the rail is diagonal to the sides of the stand which improves overall impression of composition. The last thing I’d like to mention is good angles of photo shooting – we’ve got interesting photos as a result.
Judge 3
I do not understand if it is a problem of photos, but it seems that brass over the bunker looks like better than the other... i like the construction but I have some doubt about the coloration. i find it too brilliant and few real. From realphotos seems that the scene was too dirty and with more and different vegetation.